When Leaders Fall Out – Run for Cover!

The 8 typical roles of every great manager

What is the role of today’s manager in this ever changing environment? 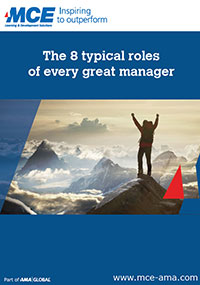 The role of today’s manager is even more complicated given today’s ever-changing global environment.  Today’s manager must be able to deal with the complexity and speed of change that is occurring in the organization.
Managers of previous generations did not have to deal with the rapidity, complexity, and frequency of changes that today’s managers must handle. In addition to these changes, a transition to management means that you give up your role as an individual contributor.

To read more about the 8 typical roles of every manager, click here.