A Cheer for the Old Dogs

Do you remember the days when anyone over 40 was already on the corporate scrap heap? Used to be a leader who had lost his moxie was doomed to a netherworld of hoped-for and patronisingly-given exec directorships allowing him or her to eke out their days until retirement mercifully kicked in. “It’s a young man’s game,” we were told. There was just no room in the world, where youth was king, for those who fell from grace just too early, still clinging desperately to the success ladder with white, shaking fingers.

But lately, I’ve been hearing stories – and most importantly seeing evidence – that being on the ropes doesn’t necessarily mean it’s all over.

Last month, one of my oldest friends fell foul of their board and the other got shanghaied in a shareholder revolt. Result? no job, no title, just the pay–off for a job that had taken its toll over the years. Not wanting to admit defeat and say sayonara to a life of getting the golf handicap into single figures, they called some pals and the results were amazing. Within a matter of days, they were looking at job offers from all over the place. What was most interesting about the whole process was the variety. Private and public sector, plus offers of lucrative consulting and turnaround assignments. From an expected vacuum and a real struggle to get back onto the radar, the phone’s been ringing off the hook.

I chatted to both of them about their next moves. Mark is 55 and in good shape with a great track record as an inspirational leader. Joshua is 60, he’s led a whole series of big businesses, done start-ups, M&As the whole thing. 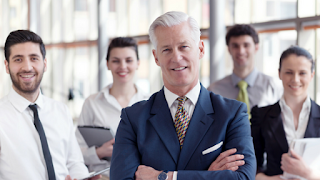 The one question that was on all their minds was the single word - “Why”?
“I don’t understand Rudi,” Mark told me. “I thought we were supposed to be over the hill, dead and buried like yesterday’s news.”
“It’s incredible,” said Joshua. “I’ve been contacted by so many people; they all want me to sign on tomorrow.”


Talking with these two novices for a time, I’ve come to the conclusion that their career resurrection is down to one thing. Organisations crave experience and battle-hardened warriors. They need to feel there is someone in charge who has been through the ups and downs and come through, battered and bruised but with all flags flying.

It may be good to be a 20 or 30-year-old whizz-kid, hyped up on technology, but most of them are very, very short on street fighting techniques. The oldies offer experience, consistency and wisdom. Being calm in the storm is a whole lot easier when you’ve seen a lot of storms and survived them.
Mark and Joshua with their long track records across industry bring the kind of insight that only serving time can bring. And in a world that’s full of daily surprises, that is the new “we want” currency.

So what will they do? They have four rock-solid offers each. They also have no illusions that nothing is forever – recent history is there to keep them firmly planted in the real world, where there are few fairy-tale endings.
Mark will take on a leadership role with a commodity firm (his global contacts and long-time relationships are worth their weight in the very sizeable package they’re giving him). Joshua isn’t quite ready to step back in. He’s signed up to be a top level mentor to a group of start-ups, bringing sane advice and counsel where it’s needed most. He’s the den mother where his leadership skills will carry a lot of weight and bring about the repositioning of the firm and its culture as it grows.

I wish them well and hope they find satisfaction in the next chapters of their careers. There’s an old saying that you can’t teach an old dog new tricks. My two friends, Mark and Joshua are out to disprove that statement. As uncertainty becomes the watchword all of us must lead and manage by, my guess is that those young rebels in the corporate suite will be ever more willing to listen to the grey hairs of their elders and until proven otherwise, presumably betters.

This column on leadership and organizational development is written exclusively for the IEDP by Rudi Plettinx, Managing Director of Management Centre Europe, the Brussels-based development organization. Have a comment or a question? Engage directly with Rudi Plettinx here.
Posted by MCE at 12:00